So, what have we learned about writers so far?

We’ve learned that Trollope was a machine (evidenced by his huge number of books), and that he wrote a specific amount every day.  Bravo, Trollope.  As an aspiring writer, I know how hard that is.  I assume your lack of a smart phone, the internet,  you tube, and such contributed to your ability to make this happen.  Also, your wife was totally the one taking care of your tots.  Plus, I bet you had servants.  Jerk.

And speaking of jerks.  Dumas, you employed a writing team, took the credit, and I assume most of the money.  Who are you? Other than a player, a soldier, and lets be honest–a whore?

Defoe what are you going to tell us?  I like that your story is set in both the states and England.  That’s fun.  But you know what’s fun-ner?  Even more fun?  Super, duper fun?  You, sir, were a spy.  A spy.  A novelist.  Why are these people SOOOOO much cooler than me?  He too wrote a bunch of books, pamphlets, etc.  He was prolific in his writing.  Oh, and did you get he was a SPY?  Plus, dudes, he was one of the founders of the English Novel. 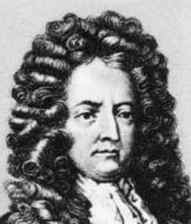 Not only was he a spy, the dude who wrote Robinson Crusoe, but he rocked this wig.  Yeah he did.

There’s a bunch of stuff to know about Defoe.  But you know what I like best?  He added the “de” to his name to sound more upper-classy.  And, in addition to rocking that wig, he totally rocked the self-made man world.

With Presbyterian dissenter parents, which was not something easy to shrug off.

Dude, Defoe, you are the coolest.

Also, your wig puts a song in my heart.

ps just kidding Anthony Trollope, you aren’t a jerk.  I heart you, buddy.