Have you noticed they’re all jerks?  I mean, honestly, someone just bomb the neighborhood and put us out of our misery.  Put them out of their misery. 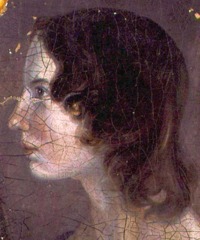 She was building a story about what would happen if they moors warped your brains.  This is what she came up with.

On another note, my Victorian Lit teacher pointed out that because Heathcliff was well-fed, didn’t speak the language, but clearly isn’t stupid, and was in a port town, he was probably a kid from another country who’d been separated from his parents during a stop over on a boat.  The “kindness” of the Mr. Earnshaw actually was an act of incredibly cruelty and arrogance.  What if he’d looked for Heathcliff’s parents?  What if he hadn’t been too busy to return a CHILD to his PARENTS?  What if he hadn’t stolen Heathcliff?  His family could well have been on to the way to a new and good life.  A life Heathcliff could have blossomed in as an important member rather than the unwanted “gypsy.”  He wouldn’t have been at the Heights for Hindley to torture.  The fledgling marriage of Cathy and Edgar Linton could have been happy, right?  The couple was, after all, happy before Heathcliff showed back up.

So, what do you think?  Are the characters miserable because of this one act of kidnapping?  Maybe they’re all so horrible it doesn’t matter whether or not Heathcliff was involved, they would have just tortured each other rather than him.  Is it all Heathcliff’s fault (Mr. Earnshaw’s fault) or is the the fact that they’re all terrible human beings whose story, in itself, is a torture.  Torture for them.  And torture for the idiotic reader who picked up the damn book after lemming* it three times previously?

Will I lem the book, yet again?

Maybe, honestly I don’t really care how it all goes down.  That cat about covers it for me.

Regardless, though, could Emily Brontë tell a story?  Dude, yes.  Her story is creepy, she uses the gothic effects beautifully.  I have been making notes for a story that’s been building in my head for like 6 months, so my time has not been ill spent.  But, for me, I need at least one character I can like.  Mostly I want them all to die.  Perhaps they could go down like the Brontës did–with an round of the consumption.

Maybe I’ll finish.  Maybe I won’t.  The notes I’ve taken have been useful, so I may carry on for that point alone.  But do I recommend?  No, gosh no.  Don’t read it.  Just go pick up Jane Eyre again or The Tenant of Wildfell Hall.  Also, this is the end of my notes on this book.  Even if I finish I won’t bother you again with how much I hate it.

But just so we’re clear.

* To Lem– “Did Not Finish”ing a book.  Stopping reading out of sheer boredom or because life is too short to plow through a horrible book for the affect of finishing it.

ps.  Up next is Villette by Charlotte Brontë.  I expect to love it.  Possibly, however, I’ll skip over and read the next Chronicle of Barsetshire.  Just to throw you off.  🙂