So, this isn’t my first time reading Tarzan.  I’ve actually read 3.5 books of the series.  Did you know that it’s a series?  With 24 books?!  I didn’t when I read the first one.  And I was PISSED at the end.

Turns out the story most of us know actually covers the first couple of books.  I wasn’t aware it was a series, so when the ending was different than I expected, I was in shock.  I went into a rage at work, venting to my co-worker.  My rage, I think, amused him.  I hope.  It’s possible I creeped him out, but since we were relatively chummy coworkers for years after, I expect not.  Maybe he chalked it up to eccentricities   I won’t spoil it for you, but if you choose to trod the Tarzan path be prepared to read at least the first two books.  From there, it branches into less well-known stories.

Tarzan, long ago, was my first pulp novel.  The thing about Tarzan is…if you rate it against all books–it’s maybe 3 stars.  But if you take it for what it is, a book about a man raised by apes, fully-intentional-pulp-fiction, it’s awesome and completely five stars.  I mean, no one writing about a dude raised by APES is intending for you to compare him to The Great Gatsby or what not.  Sometimes, I really feel that books should be rated not just by their writing but by their intent.  I mean a Twilight novel shouldn’t be rated against Pride and Prejudice.  But Pride and Prejudice should totally be rated against Wives and Daughters by Elizabeth Gaskell.  I often change my rating of a book based off of its intent.  You intend to be pulp, you do it well, you’re gonna get a better rating than a book intending to be taken seriously and only doing that moderately well.

I read Tarzan because I loved the movies.  I watched them again and again as a child because they were often on Saturday afternoon TV.  And though I’ve always been a book worm, I haven’t always had access to books like I do now.  Rarely do I choose a movie over a book these days.  But, then again, I have a stupid number of books I have yet to read.  (On a side note, I bought the DVDs of the Johnny Weissmuller movies as an adult.  Turns out the makers of the Tarzan movies made two versions.  The one to get it through the ratings and the one with the NAKED SWIM SCENE.  Yet another surprise Tarzan threw my way.  I might have also blathered on about that at work.  Man, I am such a freak.) 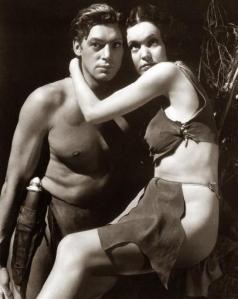 Burroughs writes a vivid picture.  The story is ridiculous but so fun you can’t help but love it.  Assuming, of course, that you’re a person who is interested in something like Tarzan.  Clearly, if the idea of Tarzan irritates you, you won’t like it.  Don’t bother with it the following picture is irritating to you:

Because that, my friends, is a scene straight out of the books.

Anyhow, since I don’t want to spoil the end for you and the story itself is well-known, I will go ahead and just say that Yes, I recommend the book.  But only if your humor leans to the above picture.  I actually restarted the Tarzan books with the intent to finish it, so even though many years have passed, it’s been something I have wanted to continue.  I guess that goes to show that Burroughs has some writing chops.  The only reason I haven’t read it yet is because the print copies were stupidly expensive after book 4 and the ebook thing has only blossomed after my reading of the early Tarzan books.  On a side note, book 4 is on the list of recommended books for boys in like Norway or what not, because it’s super fun for the 8-10 year olds or whatnot.