This front door makes me happy.  Should I buy a house any time soon, I might need a green one with red flowers.  My son, Boyo would prefer a red front door.  But this green is a very happy green.  And the flowers are red.

So… over at auburnseal.com, my buddy and writing friend is announcing a couple of surprises!  And they include me!

About one year ago, it was a really hard time for me.  Especially a couple of weekends in specific, and Auburn Seal rose to superhero status when she distracted me from those trials by writing a mystery with me.

We went straight to fluff, and it was lovely because my brain needed to be distracted by nonsense!  So we wrote the story of two witches living on a fictional San Juan Island.  The thing is…they’re really bad at magic.  AND, Ingrid and Emily have to solve the crime of who killed Emily’s ex before Emily is arrested for a murder she didn’t commit.  It might be a murder she would have committed, but she’d have done a bloody job of it, and gotten rid of the body–not left it in her basement.  They attempt to use their shoddy magic and mostly set things on fire while they stumble through discovering who killed dickhead.  All the while trying to avoid being killed–or for that matter–accidentally killing themselves.

Because we’re overachievers or easily distracted or both, Auburn Seal, Pamela Welsh, and I are writing about a world we created together.  It’s Jane Austen meets classic horror with the fictional kingdom of Kendawyn where Vampires, Werewolves, and Mages contain their hunting instincts with the social strictures of Regency England.  They’re love stories!  And there will be ball gowns!  There’s even a masquerade.  It is–in fact–brain candy! And fun!

The two above stories were some of the most fun I’ve had writing ever.  I hope you like them.  Inept Witches cracks me up and my story in Kendawyn, Compelled by Love is a story I’ve been playing with in my head since–almost–forever.  It’s the romance of two people thrown together who would have bypassed the other without the circumstances that forces them to get to know each other.  And discover love.

Or, for that matter, hopefully that’s not all that’s on your kindle for 2015.

You can expect the first of my fairytales, Snow White.  It’s part of the series Curses of the Witch Queen and set in the same kingdom of Pareon where Song of Sorrow was placed.  Only…it’s about twenty years later, and the Witch Queen is fully settled on the throne and is wreaking havoc with the lives of her people and her children.  Will true love conquer all?  Will Snow White’s romance with the handsome Prince Charming destroy Rose Red’s future? 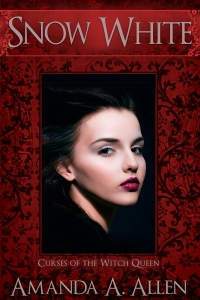 Snow White is *almost* done.  Which is stupidly exciting since I started it more than a year ago and was slowed up by the big events of 2014.

I expect that you’ll also see the sequel of Song of Sorrow titled Song of Loss, and perhaps even–the end of the first story arc about Fallow and Adin with the end of their trilogy–Song of Heartbreak.  Because I’m a weirdo, I have a full draft of Song of Heartbreak and about a half a draft of Song of Loss.  Expect to read more about the Shadow Kin, the Book of Ways, shadow warriors, and just what a mother and father will do who have their baby stolen from them.

This is a big year for me personally, and like last year, what lies ahead writing wise will fall to the wayside in my role as a Mumma.  My three babies are the best part of my life, and their happiness is my focus.  But we have a good routine down, and most of these stories are in stages of editing.  ❤  Since I have so much in process right now–(I de-stressed by drafting new stories.), it’s actually possible you’ll see far more than what’s listed above should the universe and the gods align in my favor.

PS, I started my goal of reading a classic a month again and am currently reading Can you Forgive Her? by Anthony Trollope.  I’m like three hours in.  Because it’s Trollope that means we’re still getting backstory and meeting random ass characters.  I’m also reading some random mix of book challenge that includes weird stuff like read a nonfiction or read a book with a color in it.  Read something by someone where the author is under 30.  I’ve met one of those so far with Blue Lily, Lily Blue by Maggie Stiefvater.  If we’re being perfectly honest, that book doesn’t qualify as much of a challenge.  I have to read audio these days, with three babies, and I was checking for that audio release every damn day until it came out.  I’d have read it in print, if I had to, though my bathrooms and the bottle cleaning would have suffered.

If you’ve read my blog at all, you’ll know that Maggie Stiefvater is my FAVORITE publishing YA author right now.  I’m still reading through her backlog (I haven’t read her elf books yet).  But she is a fantastic writer and I find myself freaking thinking about Gansey and Blue all the damn time.  Why isn’t the last book out yet.  Why, damn it, why?  When I think about them, it’s like thinking about friends that you miss and want to catch up with.  And then you remember that their fictional and you have to wait for the next book to come out.

So far of the series, The Raven Boys is my favorite.  But they’re all *damn* good.  And that’s like choosing between a Snickers, a Twix or a Peanut Butter Cup.  They’re all yummy.  Dude.  Noah, Ronan, Adam, Gansey, Blue, the clairvoyants over at Fox Way–I love them all.  Who knew that you could 100% love the Grey Man, a killer for hire who changes his ways?  Maggie Stiefvater makes a compelling argument to think about him in the nighttime with the way she portrays him.  ❤

And once you’re done with the Raven Cycle, assuage your need for book 4 with The Scorpio Races.  Sure, it’s about murderous horses.  Sure, it sounds insane.  It’s freaking awesome.